Bennett Rink became Executive Director of Alvin Ailey Dance Foundation in 2013. Mr. Rink first joined Ailey as Manager of Special Events in 1994, became Development Director in 1998 and then worked as Senior Director of Development and External Affairs from 2007 to 2012. In his tenure overseeing Ailey’s development and fundraising efforts, Mr. Rink led a $75 million capital campaign that supported the construction of Ailey’s first permanent home, The Joan Weill Center for Dance which opened in 2005, and established an endowment to support major program areas. When the Company celebrated its 50th anniversary in 2008, Mr. Rink supervised an 18-month celebration, including events, promotions, collaborations and special performances, bringing public awareness of the Ailey organization to new heights. In conjunction with the anniversary, Mr. Rink also oversaw “The Next Step Campaign,” which grew the organization’s endowment to $50 million.

As Executive Director, Mr. Rink launched a five-year strategic plan in 2014 to realize Artistic Director Robert Battle’s creative vision for the Company, expand the impact of Ailey’s educational offerings, and enhance technology to extend the reach of all aspects of the organization. Central to the plan has been the expansion of The Joan Weill Center for Dance, which attracts more than 200,000 visitors each year. In the fall of 2017, Ailey unveiled the Center’s Elaine Wynn and Family Education Wing, providing much- needed additional studios and classroom space to meet the growing demand for Ailey’s programs. The building now comprises 87,000 square feet and is the largest destination for dance in New York City. Mr. Rink also conceived The Campaign for Ailey’s Future, which has raised more than $50 million to support the Center’s expansion and the ongoing implementation of other long-range strategic priorities.

During Mr. Rink’s tenure as Executive Director, the Company has deepened its presence in New York City by establishing a spring season at Lincoln Center to complement its annual winter season at New York City Center, while also extending its role as America’s “Cultural Ambassador to the World” with tours to Africa, Europe and South America. In order to reach audiences beyond the realm of live performances, the Company has broadened its commitment to creating film, video and digital content, including its first-ever theatrical movie release as part of “Lincoln Center at the Movies: Great American Dance.”

Mr. Rink is a graduate of Syracuse University and holds a BFA in theater. 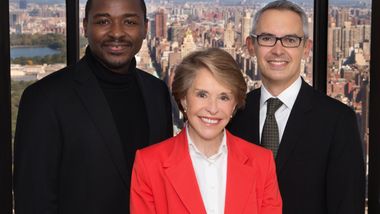 The Metropolitan Museum of Art honored its new acquisitions, including Ronald S. Lauder’s promised gift, at a black-tie gala on Dec. 7. The Alvin Ailey American Dance Theater celebrated Robert Battle’s 10 years as artistic director at its opening night gala on Dec. 1, held at the Ziegfeld Ballroom. And the New York Philharmonic held a concert and benefit dinner at Lincoln Center on Dec. 2.

The Partnership for New York City and the Alvin Ailey American Dance Theater this week released a new public service announcement aimed at encouraging New Yorkers to mask up. COVID-19 cases are mounting, with 73% of cases traced to home environments. This is where people will let down their guard during the holidays, so this PSA campaign is intended to remind New Yorkers to push through pandemic fatigue and follow protocols.

"You can see this tremendous need for people to connect to their sense of creativity... their sense of how to find hope... and I think the arts are crucial to keeping us feeling that we do have hope... at times when we are really in need of that." Bennett Rink, Exec. Dir. of Alvin Ailey Dance Foundation speaks to the role of dance and the arts today.