Sarina Jain, America’s first cross-cultural fitness star is the creator of the Masala Bhangra Workout™. She is an energetic fitness innovator, music-video choreographer and international television/radio personality. She hosts her own TV segment on Discovery Channel’s Fit TV and has a show on Exercise TV.tv. Her regular appearances on NBC, Today, and other major media have catapulted her to fame across mainstream America, and solidified her place as “Jane Fonda of Indian Dance.”

Although India’s glitzy Bollywood films have featured Bhangra and other folk-dances and music for awhile (think: diaphanous orange scarves; glittering bindis; and wrists swiveling towards the heavens), it took a vivacious, young Indian-American fitness instructor to devise the concept of choreographing Bhangra along with modern, funky dance moves to appeal to the American exercise industry. In the process, Jain has impacted the entire fitness industry, and has been heralded in the press throughout the U.S. and the world.

Jain introduced her Bhangra-style fitness routine to the U.S. with her first workout tape in 1999, and has since directed and produced a total of five high- intensity workouts in her Masala Bhangra Workout™ video/DVD series. Born in California, she started leading fitness classes at a very young age, and has been a certified fitness instructor for more than 18 years plus. She completed studies in marketing and public relations in Los Angeles, before founding her company, Masala Dance & Fitness, Inc. in 1999. She soon relocated to New York where she successfully cultivated a larger audience for her cross-cultural fitness
ideas.

Jain proudly embraces her Indian heritage, and is an active member of the Indian-American community. “People fall in love with the beat of Bhangra,” Jain says, “the music combined with its sensuous, vigorous movements recreates the excitement that an occasion is being celebrated. People have so much fun; they don't realize they are getting an awesome cardiovascular and muscle-strengthening workout. Bringing the Masala Bhangra Workout™ to people all over the world is so gratifying-- I am absolutely living my dream.” 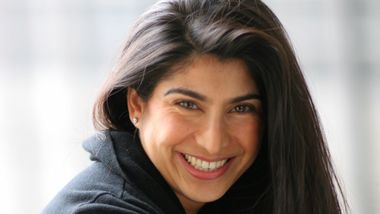 This summer, Ailey Extension is launching new weekly classes and one-time-only workshops for adults and even for the entire family. From dance fitness to bellydance to yoga classes, there’s something for students of all levels and backgrounds.

In a brightly lit studio tucked inside New York City's renowned Alvin Ailey dnace center, dozens of women and men sashay from one corner of the room to another to the beat of Bollywood rhythems, throwing their heads back dramatically.

Attending Indian weddings and ending up the night sweaty and tired from hours of bhangra dancing have been regular parts of my weekend repertory since I was a child. The catchy music can entice even the most die-hard wallflower to move.