JERMAINE TERRY (Washington, D.C.) began dancing at James Dance Center in Kissimmee, Florida. He graduated cum laude with a BFA from the University of South Florida, where he received scholarships for excellence in performance and choreography, and the Distinguished Alumnus Award for outstanding service to the arts. Mr. Terry has performed with Ailey II, Buglisi Dance Theatre, Arch Dance, Dance Iquail, PHILADANCO!, and as a guest artist on the TV show So You Think You Can Dance. He has designed costumes for New York City Ballet, San Francisco Ballet, Ailey II, and PHILADANCO! among others, and was nominated for a NY Emmy for his collaboration with The Black Iris Project, WILD: Bird of Paradise. His evening wear designs have appeared online in Vogue and Essence and have been photographed by the late Bill Cunningham for the style section of The New York Times. Mr. Terry joined the Company in 2010. Instagram: @jerms83. 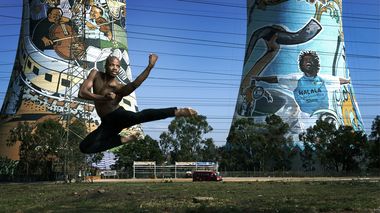 When Alvin Ailey and a small group of African-American modern dancers first took the stage at the 92nd Street Y in 1958, it was groundbreaking and revolutionary. Revelations captured the agony and triumphs of the African American experiences. Now six decades later, his multi-cultural dance company is still charting a new course in its 60th season at City Center.

In March of 1958, Alvin Ailey and his company jeté'd onto the stage with a legendary performance at the 92nd Street Y -- and the world of dance was never the same. Now approaching its 60th anniversary, the Alvin Ailey American Dance Theater continues to expand on the legacy of its late founder, one of many gay luminaries to succumb to AIDS (he passed away in 1989).