ALISHA RENA PEEK (Upper Marlboro, MD), a graduate of the Ailey/Fordham BFA Program and former member of Ailey II, began her formal dance training at the Washington School of Ballet. Ms. Peek attended Kirov Ballet Academy, participated in the Dance Theatre of Harlem Kennedy Center Residency, and studied at The Art of Technique.  Professionally, Ms. Peek has had the opportunity to work with influential choreographers such as Robert Battle, Hope Boykin, Andrea Miller, Darrell Grand Moultrie, Kirven Douthit-Boyd, Juel D. Lane, and others. She has taught at The Ailey School and various studios in the Maryland/Virginia area. Recently, she served as an assistant to Milton Myers and personal assistant to Hope Boykin. She participated in the HopeBoykinDance Bubble Residency and performed in An Evening of Hope and Moments by Hope. Ms. Peek has appeared in the FX hit series POSE and choreographed a short film produced by Beats by Dre. 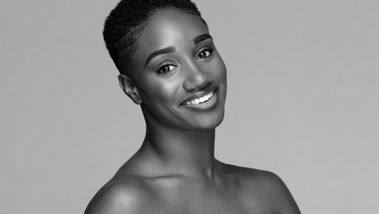