Sarita Allen has had the career most performers only dream about. The classically-trained Seattle native auditioned for the Alvin Ailey American Dance Center (now known as The Ailey School) on a lark and received a scholarship. Handpicked by Alvin Ailey, she became an original member of the Alvin Ailey Repertory Ensemble (now called Ailey II), and a year later joined Alvin Ailey American Dance Theater. In her first season, Mr. Ailey created lead roles for Allen in two Ellington premieres: The Mooche (opposite Ailey veterans Judith Jamison, Estelle Spurlock, and Sara Yarborough) and Night Creature. These ballets set the tone for her Ailey tenure with leading roles, and outstanding performances including: galas at The Paris Opera, the Acropolis, the Great Pyramids of Giza, The Kennedy Center, and at the White House for two Presidents.

Allen was an original member of Complexions Contemporary Ballet, and is currently an Artistic Advisor to that company. Her career extends beyond the concert dance genre. She performed in the motion pictures Angel Heart and The Cotton Club, and The Jacksons’ music video of their song “Torture." She also choreographed Elton John's Aida for Big League Production tours.

An Ailey Extension faculty member since its inception, Allen began teaching the Revelations master class in 2010 and developed her “labor of love”- the Ailey Barre technique. A teacher, dance legend, choreographer, and Ailey ambassador, she shares the Ailey experience nationwide. As a consultant and member of the HBO Wellness Team, Allen designed and implemented the HBO Pilates program. Allen’s wellness/fitness work has been acknowledged in fitness publications including Self Magazine, Fit Life, and Very Well, the number one online fitness reference. 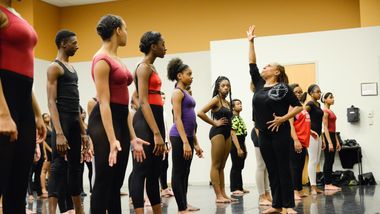 Have you ever sat in the audience at an Alvin Ailey American Dance Theater performance during the magnificent dance company’s summer and winter seasons and thought wistfully, “I would love to try to do at least some of that!” Well, nothing’s impossible.