Originally created as a solo, this high-energy comical dance was reinvented as a duet by the Ailey company for its December 2016 opening night gala benefit, “An Evening of Ailey and Jazz" – in anticipation of the legendary singer Ella Fitzgerald’s centennial in April 2017. 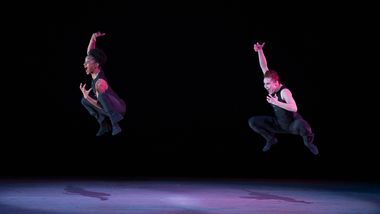 New York, NY – January 30, 2020 – Following five-weeks of exceptional performances in New York City, Alvin Ailey American Dance Theater will continue its “Ailey Revealed” season during a 21-city North American tour which kicks off during Black History Month. The 2020 engagement opens on February 4th at The Kennedy Center in Washington, D.C. with a gala to benefit Ailey's D.C. programs, including the creation of new works, Arts-In-Education activities, and scholarships to talented young area dancers to attend The Ailey School in New York. Other major cities throughout the tour include Atlanta, Chicago, Los Angeles, Berkeley, Seattle, Houston, and Boston, culminating with a Mother’s Day performance in Newark on May 10th.

Alvin Ailey American Dance Theater, recognized by U.S. Congress as “a vital American cultural ambassador to the world,” returns to Paris, Basel, five German cities, and Copenhagen to perform 15 ballets from July 4 – September 10. The Paris engagement (July 4 – 22) kicks off the tour, and marks the debut dance performance at La Seine Musicale, a new state of the art concert hall on an island in the Seine River, which opened in April 2017.

In 1958 Alvin Ailey, aware that there were few opportunities for African-American dancers and choreographers, founded a company to tell the stories of black people through movement. Since then the Alvin Ailey American Dance Theater has become one of the most popular modern ensembles in the world. The company's artistic director, Robert Battle, talks to Kirsty Lang about its history, ambition and that constant difficulty - to get boys to dance.

Before there was Scatman John and his eponymous hit “Scatman,” there was Ella Fitzgerald’s scat, an unequivocally better take on the improvisational, wordless jazz singing. This holiday season, Alvin Ailey is honoring Ella Fitzgerald’s centennial...

Paris isn’t lacking for new music venues. After the Philharmonie, another major construction project was completed in April: La Seine Musicale, in the south-western suburb of Boulogne. Designed by Shigeru Ban and Jean de Gastines, it occupies a third of the tiny Seguin Island on the Seine, hugging its shoreline; the flagship auditorium sits on one end like an oversized Fabergé egg, with rotating solar panels curving over it.