KHALIA CAMPBELL (Bronx, NY) is a graduate of Fiorello H. LaGuardia High School of Music & Art and Performing Arts. She began her formal dance training at Uptown Dance Academy. Ms. Campbell also studied at Dance Theatre of Harlem and as a scholarship student at The Ailey School. In 2012 she performed in Elton John and Tim Rice’s Broadway musical Aida (international tour in Taiwan). She has performed with Kymera Dance, Dance Iquail, and in the 40th anniversary of The Wiz at SummerStage. Ms. Campbell also danced as a guest artist with Richard Siegal’s Ballet of Difference in Munich, Germany. She was recognized in Dance Magazine’s “25 to Watch” in 2020 and is a 2021 dance fellowship recipient from the Princess Grace Foundation-USA. Ms. Campbell was also featured in Katie Couric’s segment of Thank You Notes alongside Judith Jamison. She was a member of Ailey II and joined the Company in 2018. 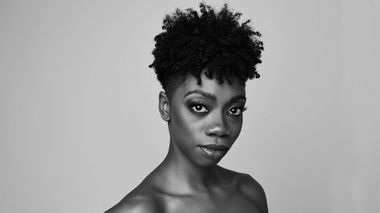 Few dance companies are more prestigious and competitive to get into than Manhattan-based Alvin Ailey American Dance Theater. So, despite years of training and confidence in the skills she’d honed, Bronx native Khalia Campbell was stunned when she was asked to join in 2018. “I cried and cried,” she says. “I was totally in shock, but I was elated and I was grateful. I think that’s the best word to describe the feeling I had — grateful. One could say that it was destined to be.” “I don’t come from a musical background, but my dad was pretty musically inclined,” Campbell says of her father, who died when she was 1. “He was a DJ and he also played the drums. He used to put his headsets around my mom’s stomach when she was pregnant with me, so I just came out being able to listen to rhythm and move to it."

Every year, in theaters and concert halls around the globe, the Alvin Ailey American Dance Theater takes audiences to church. Not just any house of worship, but the working-class, Black, Southern temples of rural Texas. The gospel they see and feel is Revelations, the company’s signature dance, which has been staged more often than the troupe’s other celebrated works, for some 25 million fans. This year Revelations turns 60, and it has lost none of its incantatory power.

Judith Jamison is one of the most accomplished modern dancers and choreographers of all time. After joining the @Alvin Ailey American Dance Theater in 1965, she achieved international fame and went on to earn the Kennedy Center Honor and a National Medal of Arts. Although she is now the Artistic Director Emerita at Alvin Ailey, to up and coming Ailey dancers like Khalia Campbell, she is simply Ms. Jamison. In this episode of Thank You Notes, Khalia reads a thank you note to Ms. Jamison.