HOPE BOYKIN (Durham, NC) is a three-time recipient of the American Dance Festival’s Young Tuition Scholarship. She attended Howard University and, while in Washington, D.C., performed with Lloyd Whitmore’s New World Dance Company. Ms. Boykin was a student and intern at The Ailey School. She was assistant to the late Talley Beatty and an original member of Complexions. Ms. Boykin was a member of Philadanco and received a New York Dance and Performance Award (Bessie). She has choreographed three works for the Company: Acceptance In Surrender (2005), in collaboration with fellow Ailey company members Abdur-Rahim Jackson and Matthew Rushing; Go in Grace (2008), for the Company’s 50th anniversary season with music by the award-winning singing group Sweet Honey in the Rock; and r-Evolution, Dream. (2016), inspired by the speeches and sermons of Dr. Martin Luther King, Jr., with original music by Ali Jackson. Most recently, Ms. Boykin was selected as a 2018–19 Urban Bush Women Choreographic Center Fellowship Candidate. Find Ms. Boykin on Twitter and Instagram at hbdance and Facebook as HopeBoykinDance. Ms. Boykin joined the Company in 2000. 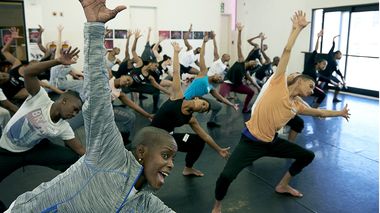 Alvin Ailey American Dance Theater, beloved as one of the world’s most popular dance companies, will return to Lincoln Center for the Performing Arts for a seven-performance engagement at the David H. Koch Theater June 14 – 18, 2017. Today, Artistic Director Robert Battle announced repertory for the season, which features the work of seven choreographers and recent premieres on three exciting programs, along with the Company debut of Battle’s 2004 work Mass, set to an original score by John Mackey performed with live music.

Modern dance is waning in popularity, and young people don't seem to feel as connected with the work anymore. So what's a 60-year-old ballet company like Alvin Ailey to do to seem limber again?

Playbill - Step From The Stage To The Studio

A professional dancer's body is a finely tuned instrument of movement and expression. And there are no more impeccably calibrated, eloquent "instruments" than those who make up the Alvin Ailey American Dance Theater.