CHRISTOPHER R. WILSON (Augusta, GA) is a graduate of John S. Davidson Fine Arts Magnet School and most recently graduated cum laude from the Ailey/Fordham BFA Program in Dance. He has studied at Colton Ballet School, Alonzo King LINES Ballet, and The School at Jacob’s Pillow. He began his professional career with BHdos, the second company of Ballet Hispánico and has per- formed at The World Monument Fund's Hadrian Gala honoring Queen Sofía of Spain as well as the 2017 Essence Festival in New Orleans. He has performed works by choreographers Matthew Rush- ing, Kyle Abraham, Emily Molnar, Annabelle Lopez Ochoa, and Eduardo Vilaro, to name a few. He has performed as a guest artist with The Black Iris Project and was a member of Ailey II. Mr. Wilson joined the Company in 2018. Follow his tour and dance adventures @christopher.r.wilson on Instagram. 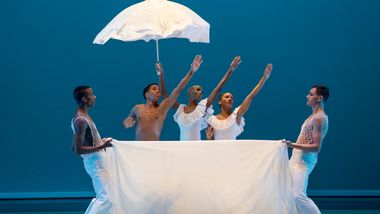 In the sun-soaked foyer of Atlanta's National Center for Civil and Human Rights, a tall, lean young man guided about 40 dance students last month as they learned an excerpt from Alvin Ailey's masterpiece Revelations. Christopher R. Wilson, a native of Augusta, Georgia, and a first-year member of the Alvin Ailey American Dance Theater, moved with ease and elegance between lines of young dancers, calling directions in a voice that matched the choreography's rhythm and cadence.